BBC reports that the UK's Advertising Standards Authority accepts that
Ryanair's advert featuring Winston Churchill did not cause widespread
offence.  Apparently, the ad managed to cause 319 complaints, 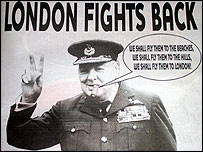 From the ASA's adjudication:


"The
Authority acknowledged that the complainants had found the approach
extremely tasteless, but noted many media commentators had, in the days
that immediately followed the terrorist attacks, commented on the
positive and determined response of Londoners to continue with life as
normal. Because it noted that response was a source of strength and
pride to many, and the advertisers had restricted the theme of the
advertisement to the stoical response that followed the attacks, the
Authority concluded that the advertisement stopped short of causing
serious or widespread offence or promoting further distress.


...The advertisers believed the use of Winston Churchill's image and
the parody of his speech were neither offensive nor disrespectful; they
pointed out that his response to the bombings during World War 2 was
one of defiance and "business as usual". The advertisers believed they
had captured the spirit of Churchill and the Blitz mentality of
Londoners in the days that followed the terrorist attacks."


Quite right, in my humble opinion.